The Next Era in Deep Technology Commercialization.

First, what is “deep tech?” Deep technologies are unique, differentiated, often protected or hard to reproduce, technological or scientific advances. These technologies are what create new industries and shake up the ones of old. A few popular examples would be CRISPR gene-editing, new vaccines, new nuclear reactor designs, robotics, new proteins sources, clean water technologies, and 3D printing. They have the potential to fundamentally improve the human condition. 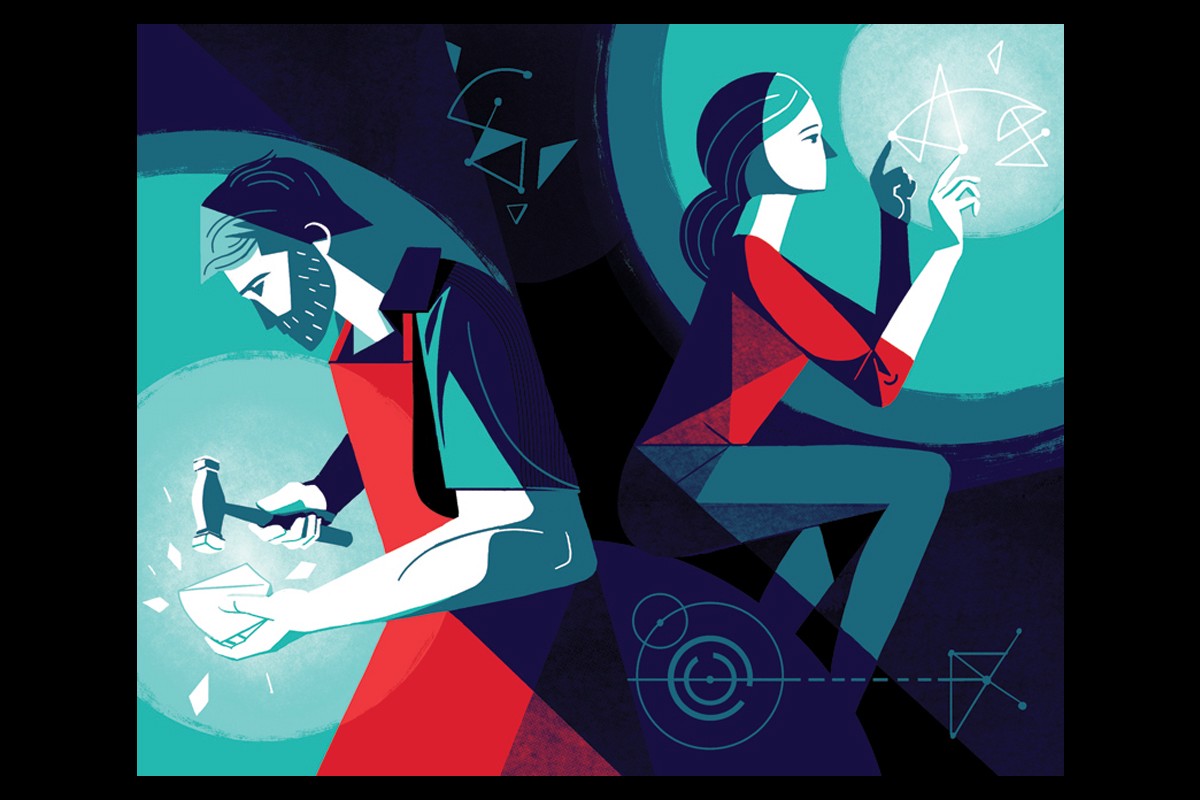 First, what is “deep tech?” Deep technologies are unique, differentiated, often protected or hard to reproduce, technological or scientific advances. These technologies are what create new industries and shake up the ones of old. A few popular examples would be CRISPR gene-editing, new vaccines, new nuclear reactor designs, robotics, new proteins sources, clean water technologies, and 3D printing. They have the potential to fundamentally improve the human condition.

To understand the spirit and mission of Technium, you must first understand the origin of our name. Below is an interview where Kevin Kelly, the founding executive editor of WIRED, describes the concept of the technium;

The ordinary pen you use every day seems very simple but it probably took 100 different technologies to make this pen technology, technologies of plastic, ink, ball bearing, metal, and each of those different technologies probably themselves required another 100 sub-technologies to support it and, of course, there’s kind of a circular way in which pens might be necessary to make a ball bearing in the same way that electricity is necessary to make a generator, and a generator may be necessary to make the wires of an electrical system. A hammer requires a handle and a head, and the saw requires the hammer to make the saw that cuts the handle, so there is a sense in which all of this is very recursive and that there is a network of different supporting technologies, and that the whole web of all these things Kevin Kelly calls the technium. The technium is that largest network of all the technologies working together to support each other, and while this pen is definitely not alive, there is a sense in which the technium as a whole exhibits life-like behaviors in the same way that your neuron doesn’t really think, but the network of neurons in your brain can make an idea.

Technology is anything a mind produces

My definition of technology is anything a mind produces, so I have a very broad scope of technology. It’s anything that’s being produced by our minds, and that would include not the individual works of art but the technologies of art, painting and symphonies. These were all, in some senses, technologies, they are products of our mind and not just a personal expression but something that’s useful, and so intangibles like a calendar are a technology. Software is obviously a technology. Infrastructures like roads and a library, these are technological inventions, and thus show a very broad definition. I would suggest that in the future when we have robots and AIs, the inventions that these minds will make will also be technologies. That’s what technology is.

Tools are technologies, which can be intangibles and processes. They don’t have to be hardware. It’s useful stuff, and the best tools are tools that enable other tools. They’re open possibilities, possibilities that unleash future possibilities, and those are the greatest tools.”

Technium is a tool that enables other tools

If technology is anything the mind produces, then to create new, impactful technologies, we need to connect the right minds together in a new network.

There’s an evolution occurring among maturing networks. You can see it in the following examples Arjun Sethi presents in The Hive is the New Network:

“When it comes to car travel, Google Maps gives us the distance between point A and point B, but Uber moves us from A to B faster.

When it comes to socializing, Facebook gives us a way to connect, but Messenger helps us to communicate.

When it comes to shopping, eBay allows us to buy anything online, but Amazon Prime gives us what we want when we want it.

The value of being connected isn’t in being networked. It’s having an opinion and taking action toward an outcome.”

In a world that’s increasingly connected, open, and collaborative, we can connect the right minds together like never before to solve our greatest challenges and build game changing new ventures.

If you look at the Association of University Technology Managers (“AUTM”) reporting metrics, universities generate about 184,000 invention disclosures. Roughly 8 percent of those disclosures are then licensed. Ultimately, only about 0.8 percent lead to a new start-up company. The final result is only 0.6 percent of all the active licenses generate returns in excess of $1 million. That is an incredibly low return on investment from the almost $65 billion spent on federal research and development annually. Even more alarming is the fact that with all of these inventions being captured and patents being filed, more than 70 percent will sit on “university shelves” and never be licensed — which is still better than the more than 90 percent of U.S. patents that never make any money and will remain idle in the U.S. Patent and Trademark Office.

Why are all these life-saving technologies being created, but still on the proverbial shelf?

The Existential Crisis of Today’s Model

“The best minds of my generation are thinking about how to make people click ads. That sucks.”

Entrepreneurs across the world have been sucked into the narrative of building features, widgets, and irrelevances that solve fake problems. These mislead entrepreneurs from building transformative technologies. Billions in new capital in the past 5 years have rushed into the sector and supported these pursuits in the hopes of generating returns. The party looks like it’s over with everyone quietly leaving instead of a giant bust.

This year will go down in memory as the year that the unicorn went back to being a mythical beast.

Global stock markets are off to a depressing start, the U.S. economy is slowing, interest rates are ticking back up and there are a paucity of tech IPOs on the horizon. These macroeconomic signals bode poorly for additions to the once-hot batch of tech startup companies known as unicorns, which have private valuations of $1 billion or more.

Since late last year, concrete examples of the death of the unicorn era have been popping up across Silicon Valley. Some are in the form of acquisitions or investments at lower or equal valuations to past funding rounds. Startups likeGilt Groupe, once valued at $1.1 billion, and Good Technology, previously valued at $1 billion, sold or sold their assets at prices far below their once lofty valuations.

The investors are finally facing reality and responding accordingly

Q3 2016 saw USD$24.1 billion invested across 1,983 deals globally, representing a very slight deal increase from Q2 2016, but a 14 percent decline in total quarterly funding. Although the deal volume is still quite healthy by pre-2014 standards, this was the lowest quarter of funding since Q3 2014.

What are entrepreneurs and investors to do while facing the stark reality coming to bear?

A Renaissance in Deep Tech Entrepreneurship

We are seeing a steady stream of entrepreneurs and investors taking their blinders off and waking up to realize we must take action to build the future we want. We must empower mission-driven entrepreneurs building real technologies.

We can see glimmers of the renaissance:

It started with Founders Fund’s manifesto: We wanted flying cars, instead we got 140 characters:

“In the 1970s, computer hardware and software companies received funding; the 1980s brought the first waves of biotech, mobility, and networking companies; and the 1990s added the Internet in its various guises. Although success now makes these investments seem blandly sensible, even obvious, the industries and companies backed by venture were actually extraordinarily ambitious for their eras. Although all seemed at least possible, there was no guarantee that any of these technologies could be developed successfully or turned into highly profitable businesses.

We believe that the shift away from backing transformational technologies and toward more cynical, incrementalist investments broke venture capital.

Upfront Ventures is taking a stand:

Lux Capital has been investing in deep technology for more than a decade.

“We invest in people who are building futuristic, cutting-edge science and technology ventures:”

Of Scientists and Rebels
By Josh Wolfe and Peter Hébertmedium.com

Bryan Johnson has taken a strong stance and put personal capital in pursuit of the future:

“Today I am announcing the OS Fund — $100 million of my personal capital dedicated to investing in inventors and scientists who aim to benefit humanity through quantum leap discoveries at the operating system, or OS, level.”

Rewrite the OS, Change the World
A challenge worthy of the greatest hearts and minds of our generationmedium.com

Entrepreneurs are waking up from the haze and are being inspired by the work Elon Musk is doing. They want to work on big challenges, solving real problems. They’re tired of the next on-demand food delivery app.

“In Silicon Valley, there is an entrepreneur on every corner, and a new you-sit-at-home-naked-while-i-do-your-shopping app every week. Only a handful of companies, proportionally speaking, are actually trying to do things that will have a meaningful impact, and the organizations that have true vision are generally underfunded and unnoticed.”

So, how can we unleash the full potential of this energy from entrepreneurs, scientists, and investors?

We are more connected than ever. Today, more than 3.5 billion people are connected to the internet. There’s almost a mobile phone for every person on Earth. These connections are the foundation of the next innovation era, and the ventures we’ve seen so far like Moderna Therapeutics and Hampton Creek Foods are just the tip of the entrepreneurial iceberg.

At Technium, we use proprietary tools to help entrepreneurs and executives discover, validate, and launch deep technologies every day.

We focus on three key activities:

Time is a priceless commodity for every great entrepreneur and inventor, so we are proud to give them back weeks and months through our work.

Lets open the floodgates to entrepreneurs who have been aching to work on meaningful, ground-breaking technologies.

P.S. If you love our mission, follow us on:

Facebook, Twitter, or Linkedin. These will be the first places we communicate about new updates, prizes, and challenges. We’ll also be showcasing amazing entrepreneurs, organizations, and inventors who exemplify our spirit and mission.

You can reach out directly to me anytime!

Thanks to Hunter Louderback (hide).